Rated in the top 5 best resort beaches on Menorca, especially for smaller children due it's perfect sands, gently sloping shallows into crystal clear turquoise waters. And while this makes it very popular for children it's big enough for those who prefer to avoid the little ones to find their ideal spots! Sun lounger, umbrella, pedalo, kayak hire is available on the beach.

The view on the beach looking out to sea is really attractive especially as the water here is very shallow making it look more like a natural lake. In early season it is particularly spectacular as the hotel crowds have not yet arrived and it's a very impressive piece of water!

There is a beach bar and restaurant at the eastern end of the beach. At the western end bars/restuarants are to be found just behind the beach area. If you are mobile and you are looking for something a little less full of children then head west for Arenal den Son Saura at nearby Son Parc or east to Es Grau, or the Virgin Beaches at Playa Cavalleria and Binimel la to the west.

Would Arenal Den Castell suit us?

Arena D'en Castell is located on the north east coast of Menorca within an easy bus ride of other towns to visit. Arenal den Castell is the fourth largest resort on Menorca and is on the eastern side of Menorca where most of island's attractions are located.

The resort of Arenal d'en Castell, along with it's nearest neighbour Son Parc with its golf course and tennis facilities, are the largest holiday resorts on the north east coast. Arenal den Castell is a mixture of hotels catering for packaged holidays, commercial apartments and private villas and appartments attracting the independent self catering traveller.

The bay at Arenal d'en Castell is as close to a near perfect horseshoe as you can get. The headlands on the waters' horizon close in so much so that you think you might be standing by a large saltwater lake. While some areas behind the beach has been developed, the varying ground height levels means its more natural than it might first appear in photographs. The eastern end of the resort and beach is more naturally intact with wooded areas and sand dunes and is where most of the private villas and apartments are located.

The resort's geography defines it's character- There is a flat headland at the eastern end called Punta Grossa which links to the eastern, woodland end of the beach with it's sand dunes. Towards the western end the land rises with a steep valley splitting the resort- here the resort is terraced with facilties on about three distinct levels.

Shopping in Arenal is limited mainly to supermarkets offering summer clothing, beachware and souvenirs. There is a Pons perfume and branded clothing store ( Lacoste ) at resort entrance.

Self Caterers - there 5 large supermarkets just 5 mins from Airport on your way to Arenal den Castell.

There is a good supermarket at Punta Grossa with more than most.

You can reach several other beaches, and towns by bus from Arenal D'en Castell - details below

Son Bou - Top See and Do

lots more what to see and do ideas

Arenal is surounded by attractive countryside and a Marine reserve, so you are very close to enjoying this on foot or bicycle. Coastline paths ( including Cami de Cavalls ) allow you to explore the local area.

In Arenal Den Castell there are various mixed bars and restaurants with differing atmospheres catering to clientel both young and old.  Some bars ( Outback Australian Bar, Bar 51, Flamingo and Goody Goody cocktail bar ) have evening entertainment but best to see locally what is on offer. There is a livelier younger atmosphere at Backgammon bar in Coves Noves commercial square. Other entertainment happens in the larger hotels also open to non residents if you buy drinks. 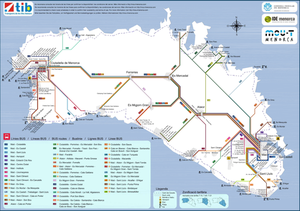 TIP:Mahon will mostly be written on timetables, front of buses and signposts as Maó, it's local name. If you are staying longer than a week take a trip on this good network and see some of the other sights, resorts/towns and attractions.

No private Cabs or Uber on Menorca

Arenal Den Castell - See and Do

...more See and Do ideas for Arenal Den Castell

What is the Weather like in Arenal Den Castell

Arenal Den Castell has a mediterranean climate characterised by hot dry summers. Menorca has pleasant cooling Summer breeze. The sea temperatures at Arenal Den Castell   will be around 22-26 degrees in Summer. In October the water is still warm. Spring time ( early March to April ) will have sunny days with temperatures around 20 and above , ideal for sightseeing, walking, cycling and horseriding activities.

Wetter & forecast through the year

Directory Bars and Restaurants in and around Arenal Den Castell 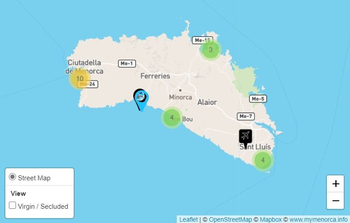 Self Catering : Accommodation only from basic Apartments to Luxurious Prestige Villas

All Hotels in and around Arenal Den Castell

Holiday in your own Home

Thinking of your own Holiday Home on Menorca?

What are the cheapest Transfers options to Arenal Den Castell from Mahon Airport?

What's to See and Do in Arenal Den Castell

Direct to your Hotel / Villa / Apartment

Reliable Menorca Shuttle Services Quotes,Book and All you need to know

With forecast, tips and practical advice. Weather in April and October?...Weather Forecast